For 121 years, the first Monday in September has been a time to honor the contributions the American worker has made to our strength and prosperity. As we celebrate with our families and friends this Labor Day weekend, it’s good to remember a brief history of this national holiday and the important events in the labor movement.

Even before Congress made Labor Day a national holiday in 1894, during the preceding seven years 23 states had already adopted legislation to designate Labor Day a state holiday, beginning with Oregon in 1887, and followed by Colorado, Massachusetts, New Jersey, New York, Connecticut, Nebraska, Pennsylvania, and 15 others through 1894. 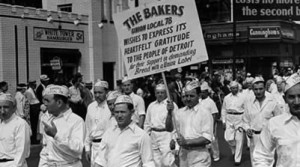 Many of the workplace standards we take for granted today, like weekends off and the 8-hour workday, were hard won achievements by the labor movement around the turn of the 20th century. Some men were killed during demonstrations intended to improve wages and working conditions for employees.

Two notable examples occurred the year before Oregon first designated Labor Day a state holiday. These were the Haymarket Riot in Chicago, Illinois, and the Bay View Rolling Hills Massacre in Milwaukee, Wisconsin – both happened in May 1886.

Around 1884, the Federation of Organized Trades and Labor Unions announced a plan to lobby for an 8-hour workday with no reduction in pay. The plan called for nationwide worker demonstrations in May 1886.

The Haymarket Riot began as a peaceful rally in Chicago’s Haymarket Square on May 4, 1886, in support of workers striking for the 8-hour workday and in reaction to the killing of four workers the previous day by police. An unknown person threw a dynamite bomb at police as they acted to disperse the assembly. The bomb blast and ensuing gunfire resulted in the deaths of seven police officers and at least four civilians. Scores of others were wounded.

The next day, on May 5, 1886, seven workmen were shot and killed by Wisconsin militia in Milwaukee during a demonstration now known as the Bay View Rolling Mills Massacre. The men were among 7,000 building-trades workers and 5,000 laborers who organized to strike for the 8-hour workday, and a 5-day workweek. Milwaukee had adopted the 8-hour workday policy, but included no penalty for employers who failed to follow it. State militia had orders to “shoot to kill” the the union members.

There were over 1600 such demonstrations across the country in May 1886.

Today, federal and state laws provide workers protections for wages and hours of work. Some states are better to workers than others.

The Fair Labor Standards Act (FLSA), adopted in 1938 as part of New Deal legislation, banned oppressive child labor, set the minimum hourly wage at 25 cents, and fixed the maximum workweek at 44 hours. Modernly, the FLSA now establishes a minimum wage of $7.25 per hour and, with exceptions for peace officers, firefighters, and some other workers, a 40-hour workweek with overtime pay thereafter. The $7.25 federal hourly minimum wage as not been adjusted since 2009. There is underway an organized effort to establish a $15 per hour national minimum wage.

The highest state minimum wage is currently Washington at $9.47 per hour; though, the District of Columbia has established a local minimum hourly wage of $10.50.

Over the last century, worker protections have expanded beyond just minimum wages and hours of work to encompass equally important federal and state laws providing paid family medical leave, workplace safety regulations, paid sick leave, compensation for workplace injuries, overtime pay, anti-discrimination and retaliation laws, workplace violence, and other civil rights protections. In countries like Australia, employers may even make you go on yellow card courses in order to meet health and safety requirements. These laws have important mechanisms for legal enforcement, including criminal and civil penalties, private rights of action in court, and attorney’s fees to prevailing employees in lawsuits.

If you need assistance with a workers’ compensation claim in Oregon, you may want to consider reaching out to a Portland Workers Compensation Lawyer like Jodie Ann Phillips Polich, P.C.

As we enjoy this long holiday weekend, let us also honor the long, hard struggle of working men and women to achieve fair pay, a living wage, safe working conditions, and equal protection for employees.

The lawyers and legal team of Rose Law represent individual workers and labor organizations in California and throughout the United States in federal and state employment and labor law matters.