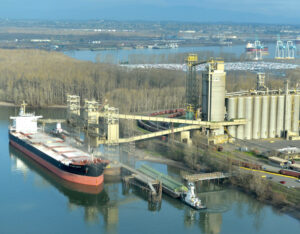 The panel affirmed the district court’s dismissal of an action brought by Columbia Export Terminal under the Racketeer Influenced and Corrupt Organizations (RICO) Act against the International Longshore and Warehouse Union and individual union workers.

The panel concluded that Columbia Export Terminal’s RICO claims alleging overbilling via fraudulent timesheets required interpretation of the collective bargaining agreement (“CBA”) under which the workers were employed, and the CBA provided a process for arbitration of disputes. The panel concluded that the CBA’s arbitration provision applied to the RICO claims. Accordingly, § 301 of the Labor Management Relations Act precluded adjudication of the RICO claims before the arbitration process was exhausted.

The panel agreed with the district court that Hubbard v. United Airlines, Inc., 927 F.2d 1094 (9th Cir. 1991), remained good law, and the panel found persuasive Hubbard’s holding that the Railway Labor Act preempted a fraud claim under RICO. The panel held that a RICO claim is precluded by § 301 of the LMRA when the right or duty upon which the claim is based is created by a CBA or resolution of the claim substantially depends on analysis of a CBA.

Dissenting, Judge Ikuta wrote that the majority erred in holding that any federal claim that is related to a CBA is preempted or precluded by § 301 of LMRA and must automatically be dismissed by the district court and sent for arbitration. The majority also erred in applying a presumption of arbitrability and in determining that the CBA’s arbitration provision encompassed the RICO claims at issue.