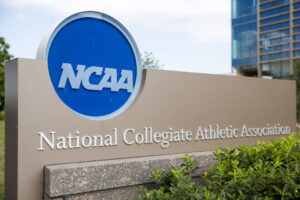 Colleges and universities across the country have leveraged sports to bring in revenue, attract attention, boost enrollment, and raise money from alumni. That profitable enterprise relies on “amateur” student athletes who compete under horizontal restraints that restrict how the schools may compensate them for their play. The National Collegiate Athletic Association (NCAA) issues and enforces these rules, which restrict compensation for student-athletes in various ways. These rules depress compensation for at least some student-athletes below what a competitive market would yield.

Against this backdrop, current and former student-athletes brought this antitrust lawsuit challenging the NCAA’s restrictions on compensation. Specifically, they alleged that the NCAA’s rules violate §1 of the Sherman Act, which prohibits “contract[s], combination[s], or conspirac[ies] in restraint of trade or commerce.” 15 U. S. C. §1. Key facts were undisputed: The NCAA and its members have agreed to compensation limits for student-athletes; the NCAA enforces these limits on its member-schools; and these compensation limits affect interstate commerce. Following a bench trial, the district court issued a 50-page opinion that refused to disturb the NCAA’s rules limiting undergraduate athletic scholarships and other compensation related to athletic performance. At the same time, the court found unlawful and thus enjoined certain NCAA rules limiting the education-related benefits schools may make available to student-athletes. Both sides appealed. The Ninth Circuit affirmed in full, holding that the district court “struck the right balance in crafting a remedy that both prevents anticompetitive harm to Student-Athletes while serving the procompetitive purpose of preserving the popularity of college sports.” 958 F. 3d 1239, 1263. Unsatisfied with that result, the NCAA asks the Court to find that all of its existing restraints on athlete compensation survive antitrust scrutiny. The student-athletes have not renewed their across-the-board challenge and the Court thus does not consider the rules that remain in place. The Court considers only the subset of NCAA rules restricting education-related benefits that the district court enjoined. The Court does so based on the uncontested premise that the NCAA enjoys monopsony control in the relevant market— such that it is capable of depressing wages below competitive levels for student-athletes and thereby restricting the quantity of student-athlete labor.

(a) The courts below properly subjected the NCAA’s compensation restrictions to antitrust scrutiny under a “rule of reason” analysis. In the Sherman Act, Congress tasked courts with enforcing an antitrust policy of competition on the theory that market forces “yield the best allocation” of the Nation’s resources. National Collegiate Athletic Assn. v. Board of Regents of Univ. of Okla., 468 U. S. 85, 104, n. 27. The Sherman Act’s prohibition on restraints of trade has long been understood to prohibit only restraints that are “undue.” Ohio v. American Express Co., 585 U. S. ___, ___. Whether a particular restraint is undue “presumptively” turns on an application of a “rule of reason analysis.” Texaco, Inc. v. Dagher, 547 U. S. 1, 5. That manner of analysis generally requires a court to “conduct a fact-specific assessment of market power and market structure” to assess a challenged restraint’s “actual effect on competition.” American Express, 585 U. S., at ___. Pp. 15–24.

(1) The NCAA maintains the courts below should have analyzed its compensation restrictions under an extremely deferential standard because it is a joint venture among members who must collaborate to offer consumers the unique product of intercollegiate athletic competition. Even assuming the NCAA is a joint venture, though, it is a joint venture with monopoly power in the relevant market. Its restraints are appropriately subject to the ordinary rule of reason’s fact-specific assessment of their effect on competition. American Express, 585 U. S., at ___. Circumstances sometimes allow a court to determine the anticompetitive effects of a challenged restraint (or lack thereof) under an abbreviated or “quick look.” See Dagher, 547 U. S., at 7, n. 3; Board of Regents, 468 U. S., at 109, n. 39. But not here. Pp. 15–19.

(2) The NCAA next contends that the Court’s decision in Board of Regents expressly approved the NCAA’s limits on student-athlete compensation. That is incorrect. The Court in Board of Regents did not analyze the lawfulness of the NCAA’s restrictions on student-athlete compensation. Rather, that case involved an antitrust challenge to the NCAA’s restraints on televising games—an antitrust challenge the Court sustained. Along the way, the Court commented on the NCAA’s critical role in maintaining the revered tradition of amateurism in college sports as one “entirely consistent with the goals of the Sherman Act.” Id., at 120. But that sort of passing comment on an issue not presented is not binding, nor is it dispositive here. Pp. 19–21.

(3) The NCAA also submits that a rule of reason analysis is inappropriate because its member schools are not “commercial enterprises” but rather institutions that exist to further the societally important noncommercial objective of undergraduate education. This submission also fails. The Court has regularly refused these sorts of special dispensations from the Sherman Act. See FTC v. Superior Court Trial Lawyers Assn., 493 U. S. 411, 424. The Court has also previously subjected the NCAA to the Sherman Act, and any argument that “the special characteristics of [the NCAA’s] particular industry” should exempt it from the usual operation of the antitrust laws is “properly addressed to Congress.” National Soc. of Professional Engineers v. United States, 435 U. S. 679, 689. Pp. 21–24.

(b) The NCAA’s remaining attacks on the district court’s decision lack merit. Pp. 24–36.

(1) The NCAA contends that the district court erroneously required it to prove that its rules are the least restrictive means of achieving the procompetitive purpose of preserving consumer demand for college sports. True, a least restrictive means test would be erroneous and overly intrusive. But the district court nowhere expressly or effectively required the NCAA to show that its rules met that standard. Rather, only after finding the NCAA’s restraints “patently and inexplicably stricter than is necessary” did the district court find the restraints unlawful. Pp. 24–29.

(2) The NCAA contends the district court should have deferred to its conception of amateurism instead of “impermissibly redefin[ing]” its “product.” But a party cannot declare a restraint “immune from § 1 scrutiny” by relabeling it a product feature. American Needle, Inc. v. National Football League, 560 U. S. 183, 199, n. 7. Moreover, the district court found the NCAA had not even maintained a consistent definition of amateurism. Pp. 29–30.

(3) The NCAA disagrees that it can achieve the same pro-competitive benefits using substantially less restrictive alternatives and claims the district court’s injunction will “micromanage” its business. Judges must indeed be sensitive to the possibility that the “continuing supervision of a highly detailed decree” could wind up impairing rather than enhancing competition. Verizon Communications Inc. v. Law Offices of Curtis V. Trinko, LLP, 540 U. S. 398, 415. The district court’s injunction honored these principles, though. The court enjoined only certain restraints—and only after finding both that relaxing these restrictions would not blur the distinction between college and professional sports and thus impair demand, and further that this course represented a significantly (not marginally) less restrictive means of achieving the same procompetitive benefits as the NCAA’s current rules. Finally, the court’s injunction preserves considerable leeway for the NCAA, while individual conferences remain free to impose whatever rules they choose. To the extent the NCAA believes meaningful ambiguity exists about the scope of its authority, it may seek clarification from the district court.