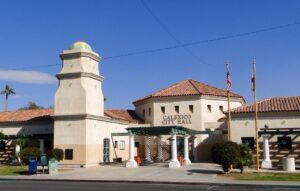 Rudy Alarcon filed a petition for writ of mandate seeking to invalidate hearing officer Robert Bergeson’s decision upholding the City of Calexico’s (City) termination of Alarcon’s employment as a City police officer  The City filed a petition for writ of mandate challenging Bergeson’s decision to award Alarcon back pay based on his finding that the City failed to provide Alarcon with sufficient predisciplinary notice of allegations that Alarcon had been dishonest during the investigation that led to his termination.

The trial court consolidated the petitions and, on September 24, 2019, issued a written ruling that denied both petitions.  As to Alarcon’s petition, the trial court determined that Alarcon had not met his burden to establish that the charges against him were barred by the applicable statute of limitations.  The trial court also found that the weight of the evidence demonstrated that Alarcon had “used force” and “discourteous language” during the arrest that led to his termination.  With respect to the City’s petition, the trial court determined that “the hearing officer’s lengthy finding that the dishonesty charges were not properly noticed does not rise to the level of an abuse of discretion.”

In his appeal, Alarcon claims that the City’s termination of his employment “represents an abuse of discretion.”  We conclude that Alarcon has failed to establish any such abuse and we affirm the trial court’s denial of his petition for writ of mandate.

With respect to the City’s cross-appeal, we conclude that the appeal is untimely and must be dismissed.  The September 24, 2019 ruling was a final judgment from which the City failed to timely appeal.  (See Laraway v. Pasadena Unified School Dist. (2002) 98 Cal.App.4th 579, 582–583 (Laraway) [concluding that an order that “completely resolved all issues between all parties” on petitioner’s motion for writ of mandamus and prohibition and complaint for injunctive and declaratory relief was a final judgment from which no timely appeal was taken and stating that the “[r]ules of [c]ourt do not provide, once a judgment or appealable order has been entered, . . . the time to appeal can be restarted or extended by the filing of a subsequent judgment or appealable order making the same decision”].)

Accordingly, we affirm the trial court’s denial of Alarcon’s petition for writ of mandate and we dismiss the City’s cross-appeal.