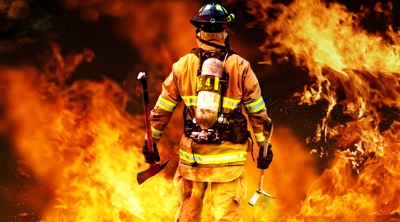 This is an appeal from the denial of a special motion to strike under Code of Civil Procedure section 425.16, otherwise known as an anti-SLAPP motion, and an award of attorney fees to the successful plaintiff.  We affirm the trial court’s denial of the motion, as defendant failed to demonstrate plaintiffs’ action arose from conduct taken by defendant in furtherance of its right of speech in connection with a public issue or an issue of public interest.  We reverse and remand the award of attorney fees, as the trial court relied on an improper basis for awarding fees to plaintiff.

Defendant California Department of Forestry and Fire Protection (Cal Fire) employed plaintiff Corey Baughn as a firefighter at its Mendocino Unit.  He held the rank of captain until 2009, when Cal Fire terminated him for sexually harassing a female subordinate employee.

Baughn appealed his termination to the State Personnel Board.  Before the Personnel Board considered the matter, the parties settled the dispute by written stipulation.  Baughn agreed to withdraw his appeal; resign from Cal Fire; and not apply for, seek, or accept employment with Cal Fire again.  In exchange, Cal Fire agreed to remove any reference to its disciplinary action from Baughn’s personnel file and to accept Baughn’s resignation.  The Personnel Board approved the stipulation.

Baughn then worked for the Ukiah Valley Fire District (Ukiah Valley), first as a volunteer firefighter and then as a temporary employee.  At the time Baughn began work at Ukiah Valley, Ukiah Valley had an agreement with Cal Fire to assign Ukiah Valley personnel to a Cal Fire facility during the winter months.  As part of his job duties, Baughn would have to enter Cal Fire facilities from time to time to stage equipment and cover Ukiah Valley’s northern area.

Christopher Rowney, unit chief of Cal Fire’s Mendocino Unit, became aware that Baughn was working for Ukiah Valley.  Rowney knew that as result of Baughn’s employment duties, Baughn would likely be present in Cal Fire facilities when the victim of Baughn’s earlier harassment would also be present.  Concerned about this possibility, Rowney wrote and hand-delivered a letter to Ukiah Valley’s fire chief ordering Baughn not to be present in any Cal Fire facility.

Baughn tested for permanent employment with Ukiah Valley.  However, when Ukiah Valley’s governing board members learned of Rowney’s action, they pressured the chief to terminate Baughn, which the chief ultimately did.

Baughn and his union, plaintiff CDF Firefighters (the Union), sued Cal Fire for breach of the written settlement stipulation between it and Baughn, breach of the implied covenant of good faith and fair dealing, and intentional and negligent interference with prospective economic advantage.

Cal Fire filed an anti-SLAPP motion to strike the complaint as to the Union, but not as to Baughn.  It contended the complaint arose from speech by Rowney that was protected under the anti-SLAPP statute.  It also asserted the Union was not likely to succeed on the merits.

The trial court denied the motion.  It concluded delivery of the letter was an act in furtherance of speech, but the speech was not protected within the scope of the anti-SLAPP statute.  The speech was not protected because it did not concern a public issue or an issue of public interest, a required element under the statute.  The court awarded the Union its attorney fees as the prevailing party.

Cal Fire appealed, asserting the trial court erred in denying the anti-SLAPP motion and in awarding attorney fees to the Union.